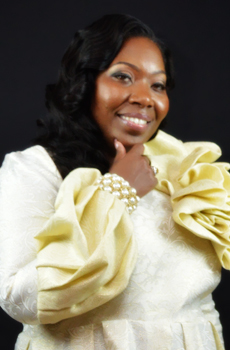 Dr. Latara Tillman’s philosophy of Ministry is that she is a worshipper first, and a preacher second. She was anointed from her mother’s womb to declare definitively the Prophetic Word of God. It has always been the motivation of Dr. Tillman to be productive in the Kingdom.

God has used her mightily to change the lives of the saints and birth revival fire to the Body of Christ. She is the Co-founder of the Fresh Fire Leadership and Prophetic Conference. She is the Founder and CEO of Latara Tillman Ministries (L.A.T Ministries), but her most treasured position is being the Elect Lady of the Greater Refuge Cathedral Inc. Church of God In Christ.

Dr. Tillman’s gift has given her a mandate to sharpen the individual giftings within the body of Christ in their knowledge and understanding of the five-fold ministry by creating “The School of the Prophets”, a three-day intensive Christian course that allows her to flow in a prophetic anointing that is changing people’s lives. She has penned two training manuals that guides the learner deeper into the divine knowledge of the five-fold ministry especially in the area of the prophetic. The demand for this course has prompted her to build and launch The Prophetic University. This is an online virtual classroom setting that takes place virtually over a 8 month course curriculum. Her passion for teaching emerging leaders in the body of Christ is leading her to offer this course several times a year with students enrolled from around the nation with the online platform model. This is also an opportunity for Dr. Tillman to dive beyond the deep to uncover the now word that God gives her at the very moment the unction of the Lord speaks to her spirit to deliver to the prophetic student. Dr. Tillman created the women only Facebook group called “Girl Talk With Dr. LaTara Tillman” which currently has over 5,000 women and is growing daily. She offers several Mentoring Programs and Masterclasses for women in ministry that is impacting the lives of successful young women across the United States.

Above all of these accomplishments, Dr. Tillman will declare that she is most grateful to be a devoted wife to her husband, Superintendent A. DeWayne Tillman, and a caring mother to her daughter and son, which is her most Divine Mission that God has given her, loving her Family.